The Magi Opened Their Treasures

Matthew 2:11 says, “After coming into the house they saw the Child with Mary His mother; and they fell to the ground and worshiped Him. Then, opening their treasures, they presented to Him gifts of gold, frankincense, and myrrh.”

The Magi bring three gifts (which led to the belief that perhaps there were three Magi). Their gifts are the gifts of the rich, fit for a newborn king, fit for the Son of God. 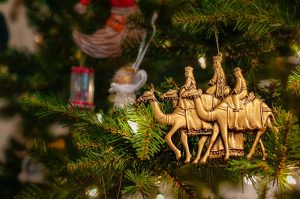 The Magi come from the East, indicating that they are Gentiles. They may have been Zoroastrian astrologers from the Iran area. They come to Jerusalem to the reigning king, seeking a newborn king (Mt. 2:1ff). When they show up, heads turn and mouths drop.

Why wouldn’t the Jewish scribes get more excited? Maybe they just could not believe God would send pagans to come tell them about the Jewish messiah’s birth. They knew the most (Mt. 2:4-6) but did the least to follow up on the greatest truth they’d ever heard.

Even though these Magi were pagans, God chose to give them a great gift. Or maybe, because they are Gentiles, God chose to give them this great gift. He is called Jesus because he will save his people from their sins (Mt. 1:21); but his people (Israel) will soon include all races and all nationalities, not just Jews. As Paul will write the church at Galatia many years later, “There is neither Jew nor Gentile, neither slave nor free, nor is there male and female, for you are all one in Christ Jesus. If you belong to Christ, then you are Abraham’s seed, and heirs according to the promise” (Gal. 3:28-29).

The worship and the gifts of these wise men would communicate to Joseph and Mary something special about Jesus and about how precious their little family was to the God who providentially cares for his children. Many times, God uses people to help people. It happened in the case of the Magi seeking Jesus as a babe to honor and worship him. These extravagant gifts would bring some much needed capital to a family trying to provide for a young child.

They opened their valuable treasures, but eternally valuable treasure was opened up for them through what the birth of this child would mean for the whole world. Tom Wright appropriately writes: “Listen to the whole story, Matthew is saying. Think about what it meant for Jesus to be the true king of the Jews. And then—come to him, by whatever route you can, and with the best gifts you can find” (Matthew For Everyone, v. 1, p. 12).