The Power of Joyous Praise 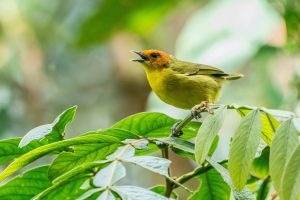 Acts 16:25 tells us about two men doing time, and doing something interesting during that time: “Around midnight, Paul and Silas were praying and singing hymns to God, and the other prisoners were listening.”

Did you realize that by praising God with a heart full of joy you could lead someone around you closer to faith in Christ?

Envision this scene: It’s midnight. There’s Paul. There’s Silas. They’re not exactly living it up at The Hilton. Could it get worse than this dark, depressing confinement? Perhaps Paul and Silas thought, “How could things be better? We have a captive audience as we sing our faith! What an opportunity!”

But it wasn’t just a captive audience; it was a captivated audience, so caught up in it that when the opportunity to leave came, they promptly…stayed. I love how Eugene Peterson translates this verse in The Message: “Along about midnight, Paul and Silas were at prayer and singing a robust hymn to God. The other prisoners couldn’t believe their ears.”

The prisoners encountered the winsome power of joyous, thankful praise. And the jailer was saved twice in the same night: first from suicide and then from his sins.

It’s the kind of scene that makes you want to offer joyous praise so that God is glorified. So that those around you are edified! So that your children are blessed as they learn to worship God. That kind of robust singing could build up your church family. It might even help a seeker discover God.